Mental and virtual tidy up underway....

Performed a bit of admin on my blog this morning - still needs some formatting but have set up gallery pages to feature my completed woolie wonders and those still in progress. Also included a link to my online shop incase anyone wants to adopt one.

Need to put some thought into how best to set my online self up.....blog, facebook, website, seller accounts on craft/design e-tail sites.....its a bit much for my scale of operation!

There are so many brilliant creatives out there doing amazing things but also really nailing the whole presentation/ brand/ imagery package.

So my glaringly obvious challenge is to really try to streamline my efforts, work out what I want it all to look like and establish some consistancy. I guess the best way to do this is to really try to lock down what it is i am trying to do or is it who I am? (but then that questions seems just a little more complicated!).

Have had a stab at re-writing my "about me" blurb....slightly happier with it but still requires some brain power to get perfect. Love some feedback but so appreciate all the views/ reads or whatever it is you do when you come visit my blog! 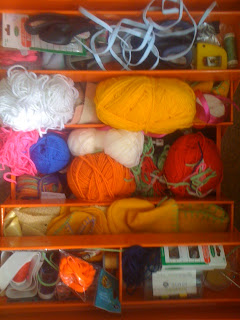 Posted by Suburban Princess at 12:31 PM No comments:

Luck & Love for our main man.

Happy father's day, we are having a pretty good one so far. Breakfast, brief skim of the papers and then off to Extreme Edge for some indoor rock climbing, roast chicken for dinner.

Not a huge budget alloted for Father's Day presents in our house. We have tended to focus on something to do together instead and in this instance we are all off at the end of the month to feed Matt's deep love of boats at the 2012 boat show followed by Yum  Cha or such.

Kids did a stirling job on the homemade card front, even Marshall managed a coloured in "certificate" c/- his new Kindy.

Being the cheap ass I am I couldn't stomach the thought of spending $7 on a card from the supermarket but found the following framed picture at our local Indian Grocer which I thought was a much better buy at less than half the price! 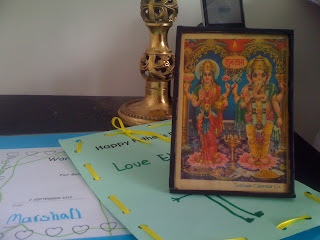 Turns out the lady on the left is the Goddess Lakshmi which means Good Luck to Hindus, and she is the goddess of wealth and prosperity, both material and spiritual. The handsome elephant-deity riding a mouse on the right is the very popular Ganesha - aka the Lord of Success, the destroyer of evils and obstacles. He is also worshipped as the god of education, knowledge, wisdom and wealth.

So I reckon we've just about covered most bases - $3 for all that and none of the indignity of having to line up at the mall for a $16 Father's Day lotto special.
Posted by Suburban Princess at 2:40 PM No comments:

Suburban Princess
my learning, yearnings and musings on life in the 'burbs. A word and picture dump about all the challenges of life and the good times too and my attempts to maintain a little regal grace in between.